The Foundation of Animalia and Fungi
by
David D'Ostilio

David D’Ostilio is a New York state multi-disciplinary artist who also teaches university classes in 3D design, sculpture, digital media, ceramic sculpture, wood sculpture, and drawing. “The Foundation of Fungi and Animalia” addresses intertwined connections between humans, fungi, and trees. The two human legs (based on the artist’s own legs) were milled from oak logs and coated in beeswax. The bumps represent fungi and how the spores spread. The legs and feet are humanity’s foundation and connection to the earth. The oak logs represent our reliance on wood. The more we look at our ecology, we see that we depend upon every part of the environment. To disregard any one part of the environment is to harm a part of ourselves.  Foundation appears around a bend in the trail to join you on your walk within nature. 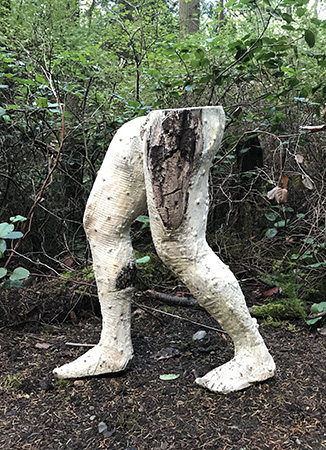 THE FOUNDATION OF ANIMALIA AND FUNGI 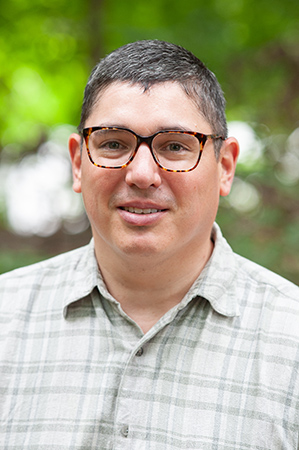 The Foundation of Fungi and Animalia addresses how intertwined life on our planet is. It specifically looks at connections between humans, fungi, and trees. The sculptural form consists of two human legs in a walking position milled from oak logs. The legs are coated in beeswax and the legs have bumps all over them. The bumps represent the fungi and how the spores spread. The legs and feet are humanity’s foundation and connection to the earth. The oak logs represent our reliance on wood. The more we look at our ecology, we see that we depend upon every part of the environment. To disregard any one part of the environment is to harm a part of ourselves. While David became specifically interested in mycology and its relationship to humanity, this work is meant to connect humans to the earth. We grow with the earth, and die with the earth. We return to the earth because we are all the earth. The beeswax brings a flesh-like appearance to the legs while also connecting bees to this interconnectedness of species. These sculptures will become a part of the ecology, becoming home to fungus, insects, and other vegetation. Thus, the human form giving life to nature instead of constantly taking.

The sculpture is made using 3D technologies. The legs are 3D scans of a model posing in a similar position to the Auguste Rodin sculpture Portrait of Balzac. The 3D model created from these scans is then manipulated to achieve proper size and appearance. This model is then milled using a 7 axis robotic CNC machine. The process creates digital data of the sculpture that exists separate from the physical work, while also embedding the algorithmically produced milling pattern on the sculpture. This digital debris codes the sculpture to a specific place in time, making it of the time while using the natural materials to address timeless issues.

The virtual world is a growing and changing place that, as artificial intelligence advances, will one day be deemed a life form. This sculpture will indirectly be connected to another life system as these digital modes develop. This will allow for the work to be recreated and updated as its natural life decays. The life cycle of materials can continue, but the life of the sculptural form can be remade, as needed. As Hito Steyerl states in ‘In Defense of the Poor Image’: “The poor image is no longer about the real thing—the originary original. Instead, it is about its own real conditions of existence: about swarm circulation, digital dispersion, fractured and flexible temporalities. It is about defiance and appropriation just as it is about conformism and exploitation.”

This sculpture is influenced by the scientific work of Thomas Cavalier-Smith, Herbert Copeland, and Paul Stamets. Cavalier-Smith and Copeland were a big part of developing taxonomy or the naming and classification of all living organisms. Cavalier-Smith has pioneered research into fungi and finds that it shares more than 50 percent of DNA with humans, thus leading to the development of a new Supergroup classification called Opisthokonta which maps Fungi closer to the animal kingdom than with the kingdom with which they are traditionally associated. A common characteristic of opisthokonts is that flagellate cells, such as the sperm of most animals and the spores of the chytrid fungi, propel themselves with a single posterior flagellum. Paul Stamets is a mycologist who advocates for the medicinal use of mushrooms, but also for their ecological importance. Some of his research includes evidence of mycelium being large communication networks in old growth forests. The vast networks of mycelium are tapped by vegetation as well as fungi beneath the forest floor.

David D’Ostilio was born in Bridgeport, Connecticut. He graduated from Moravian College with a BA concentration in painting, and later received an MFA from William Paterson University with a concentration in sculpture. In between his BA and MFA, David lived and worked in New York City. David’s early artistic influence was his grandfather, Dominick D’Ostilio, a naturalist and wildlife painter. In response to this influence, David focused on painting in his undergraduate studies and early professional work. As he exhibited paintings, drawings, printmaking, performance art, and sculptures, he became enamored with conceptualism, minimalism, sculpture, and performance art. Reading Sol LeWitt’s “Sentences on Conceptual Art” led him to new processes. The supremacy of ideas inspired this body of David’s work which began to focus on sculpture and performance. After a few successful shows, he went back to school for his MFA.

It is during graduate school that David became interested in ecology and 3D technology. This is an extension of conceptualism. The execution of ideas using machines allows the idea and the object to be above the artist’s hand. New influences further changed David’s practice including Linda Weintraub’s “To Life!: Eco Art in Pursuit of a Sustainable Planet”. This writing introduced David to new artists and methods, including the use of nontraditional materials. Robotic programming and milling become a large part of his practice, with objects produced either being made of earth materials like stone or wood, or less permanent materials that ultimately end up being cast in metal. This bridging of new technology and ancient process became a material and conceptual foundation for David’s work.

The state of David’s current practice focuses on humanity’s cultural growth by looking at the objects that have had an impact on our culture. These objects hold a power to tell stories which connect people from many backgrounds. The goal is to obfuscate what culture and time the objects come from. These works seek to explore this idea, to look at where we are currently on a societal level. To ask the questions, where have we been? Where are we going? How do we get there?

Other Sculptures Are Available to Purchase from the Artist