Driveway Path About 500 Feet In

Nice cool day for getting sweaty swinging a brush cutter and moving piles. We pushed ahead with the driveway path from the Parker Road side, perhaps getting to about a 500 foot length now.

Most of the path is about a scraping-sides car width.  So, future passes will work on expanding the width. Our focus was on forward progress. We stacked piles of bushes and branches at intervals along the way for hauling out on the trailer a later day.

Big obstacle at about the 400 foot mark, though: I cut the brush away around the large wind blown western hemlock that lays across the driveway, and it’s a big one. We emphasized getting a foot path into the property for ourselves and guests, so cutting that tree up will be for another day as well. After removing some branches, it’s easy to step over. The tree is posing somewhat of a quandary, though. It would make great firewood, but it could also be cut into sections and perhaps saved in a dry location for milling later. The milling option is intriguing since we could reuse the wood for building materials.  But, it also entails quite a bit of preparation in clearing an area, cutting the logs right, using a tractor to move them around, getting them set up for longer term storage, keeping them semi-dry, and all that. So, what to do with it is still up in the air, even if the tree is on the ground.

At about the 500 foot mark I started seeing something dark and solid ahead in the brush as I cut into it. I was expecting a large stump, and sure enough that’s what it was. It appears that we’ve gone to the end of the logging road, or at least to the end where perhaps a tractor piled up debris to block access further into the property. More likely just the end of the original road though, since the trees past that point are less defined by a path of a road. To go further, we’ll either need to divert or get a tractor to move the stumps and dirt pile.

No immediate rush on removing the pile, since there are dead and very old red alder immediately beyond that point and those trees would need to be cut down since alder rots much quicker than most other trees. They become a potential danger from falling branches or the whole tree toppling over at random times. We’ll likely plant cedar trees in their place, and perhaps try some madrone (which are extremely finicky to grow, but it may be worth an attempt since a large one is already growing nearby). 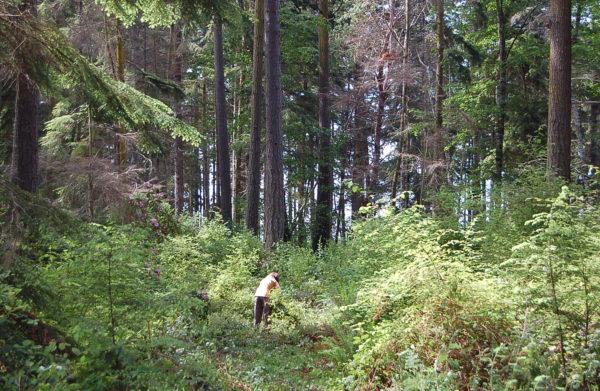 We diverted from the driveway path and instead did some clearing on a small footpath that goes to our campsite. We plan to invite some folks over for a camp-out this summer.

I found two other locations that could hold some tents and, while exploring, found new nooks and crannies that I had never even been to before! One area even led me to re-think a building site. So, further thoughts are ahead on that. I also found what may have been another old logging road on the north side of the property, traversing east-west across the slope. It seems to be perhaps used as a deer trail now, since there is a discernible path along its length among all of the growth. I also found a neat curved old growth stump with the springboard notch still clearly defined on its side (which is where the lumberjacks would insert a board to stand on so they could cut into the easier wood 8 feet or so off the ground). I’d like to wind a walking path by that old growth stump someday.

Our friendly neighbor stopped by to visit. He told us that a long time ago our property was surrounded by the large Kineth property to the east and Lovejoy farm to the west, but the exact history of our property is still a mystery. He also had some good advice around using trees for lumber. Some of Karen’s friends stopped by with their kids to check out our property too, and they seemed to enjoy exploring it with us.

The trees were alive with the sounds of spring birds, and the sun dappled forest was beautiful. I could hear the waves coming in across the beach below, and the understory was exploding with new growth. The rhododendrons were still out in full bloom. I found radiating rhodies on our property that are 20 feet tall. Good day to be outside.