This week I completed the full Forest Stewardship Program.

Closing night was a fun and rather different format than the rest of the program. The three main instructors led a game of “Jeopartree”, hosted by Alex Treebeck. The class split into three groups (we were the Fir Fiends against the Pine People and Maple Mavens), and we competed in answering review questions that spanned our past two months together in the class. We won by a close squeaker. Fun, funny, and a good idea.

The class was then opened up to presentations by each land owner to describe their own properties and what they had learned and applied from the program. Interesting array of people, land, and projects. I even learned that one of the owner groups in the class was there to help protect the forests of their nudist camp, which I had visited once for a local Burning Man event.

I gave my talk with the smooth geek factor of a PowerPoint presentation (two others had PowerPoints as well), and I received some oohs and aahs about our property plus interested follow-ups from classmates after the class finished. I also was one of only two property owners in the class to complete enough of the entire Forest Stewardship Plan to be given the official metal Stewardship Forest sign. 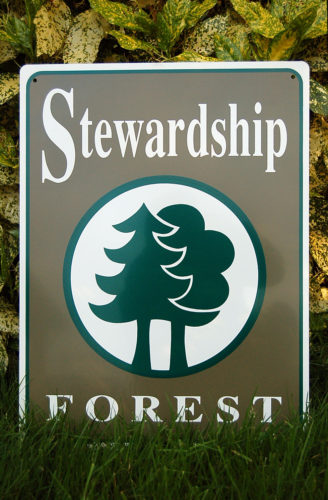